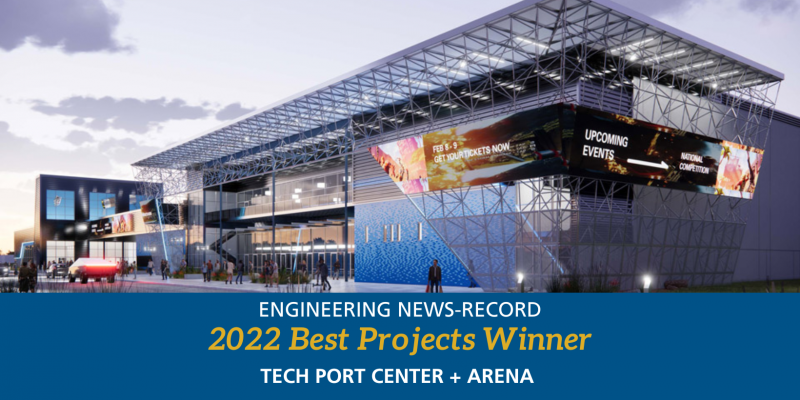 We are pleased to announce that our premier project Tech Port Center + Arena at Port San Antonio won the 2022 Engineering News-Record Texas & Louisiana Best Projects award in the Sports/Entertainment category!

Located in Port San Antonio, the once decommissioned Air Force Base has been redeveloped into a commercial and logistical center. The state-of-the-art Tech Port Center + Arena has already greatly impacted the entertainment industry and propelled San Antonio forward as a growing technology hub.

Port San Antonio houses 80 tenants, which employ nearly 16,000 people and together they generate over $5 billion in annual economic activity across our region.

The venue itself holds a technology arena and conference center, the San Antonio Museum of Science and Technology, tech collaboration labs, LAN Gaming Center, a food hall, and Capital Factory, a space for entrepreneurs, startups, and partnerships to collaborate as they work on technological innovations.

The arena has already hosted marquee acts, including The Smashing Pumpkins, and has upcoming shows by Boyz II Men and Modest Mouse.

Amber Gass, PE, led our team as the project manager, alongside Mike Hayes, the project manager for Moose Engineers, our Mentor/Protégé firm. Both teams implemented impressive MEP measures to ensure that the Tech Port Center + Arena  would be successful.

“Due to the large scope of the project, it was important to our team that we utilized the most efficient systems in order to reduce electrical consumption.” Amber continued, “The challenge was to build a space capable of pushing the boundaries of technology, while also reducing emissions and increasing efficiency.”

Amber is proud of her team’s contributions to the Tech Port Center + Arena and ranks it amongst the top projects of her career, so much so that she brought her kids to the venue and gave them a tour of the facility. Her kids were astounded by the technology features, their favorite being the large Tesla coils that generated electricity by syncing up to a song and sparking with the beat of the music.

“It was neat for the kids to see their mom in action. It’s important for them to see what I do, and be encouraged that women can be a part of important, award-winning projects too,” Amber said.

Cleary Zimmermann Engineers is proud to have been among the AEC professionals that brought this groundbreaking project to life!