When designing a variable volume chilled water system, there are two main types of distribution systems to choose from:  a variable-primary system or a primary-secondary system.  Both of these options are effective means for hydronic distribution for most building types (i.e. education, hospital, office buildings) with each system having some advantages and disadvantages as compared to the other.  It is the engineer’s responsibility to determine the best system type for each particular application.  Sometimes the decision is easy to make – the client tells the engineer directly what he wants. Other times, the engineer must make the call as to which method is the best fit for a particular project.  The following is a brief description of both systems and their advantages/disadvantages of each system, complete with (awesome) illustrations by yours truly.

A variable-primary system consists of a single hydronic loop (primary) that combines the central plant and system distribution.  This is a simple system made up of the cooling equipment with one or more variable volume pumps to distribute the chilled water to the system.  A differential pressure sensor located near the end of the system piping will direct the pump(s) to increase or decrease flow to satisfy the system.  To maintain the manufacturer’s recommended minimum flow through the chiller, the differential pressure across the chiller is measured and used to determine the flow through the chiller.  The bypass valve will then modulate based on this flow to maintain the minimum flow required across the chiller.   Refer to Figure 1 below for an example. 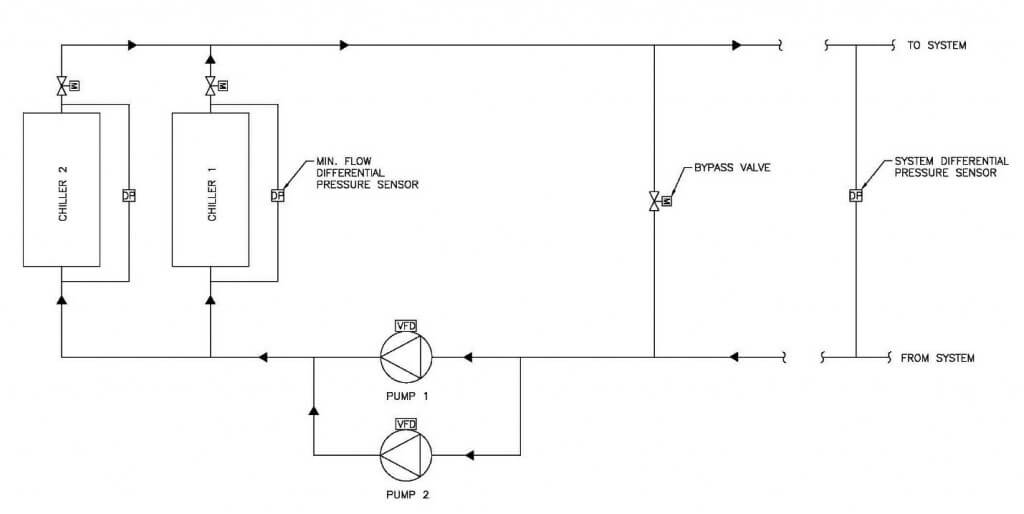 The advantages of a variable-primary system are:

The disadvantages for this system are:

A primary-secondary system consists of two hydronic loops connected by a de-coupler.  The primary loop utilizes constant volume pumps to maintain constant flow through the chillers while the secondary loop utilizes variable volume pumps to pull the chilled water from the primary loop and distribute it to the system.  A differential pressure sensor located near the end of the system piping will direct the pump(s) to increase or decrease the flow to satisfy the system.   Refer to Figure 2 below for an example. 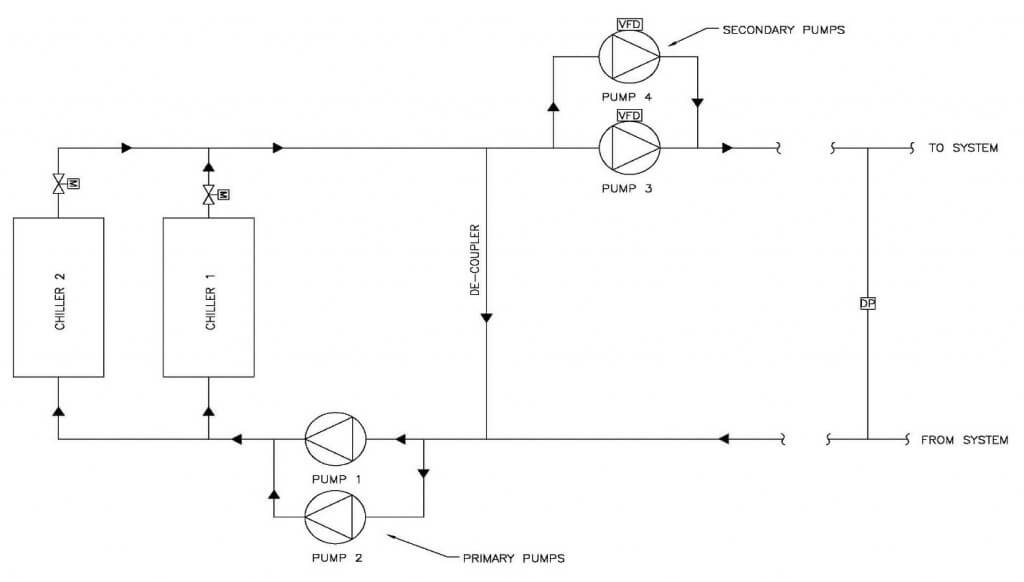 The advantages of a primary-secondary system are:

The disadvantages of a primary-secondary system are:

In summary, there is no right or wrong system, but with the increasing emphasis on energy efficiency and reducing building footprints, as well as the increase in construction costs, you can expect to see an increase in the use of variable-primary distribution systems.